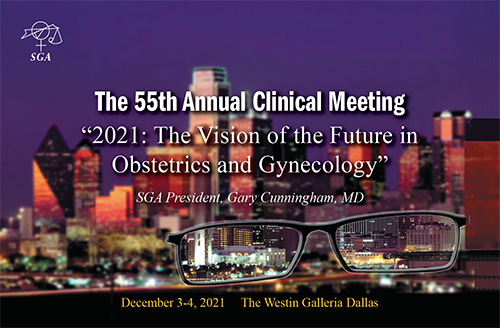 Join us for the 55th Annual Clinical Meeting, December 3-4, 2021 at the Westin Galleria Dallas Hotel.

SGA arranged for a block of rooms at the rate of $209, offered from December 2 – 5, 2021. Reservations in the SGA block are limited and will be confirmed on a first come, first serve basis.

The buttons below allow for CONFERENCE Registration, HOTEL Reservations, and Exhibitor Registration.

If you need assistance with hotel reservations, contact Dawn Garza by calling 469-964-5363 or CLICK HERE to email Dawn

The Vision of the Future in Obstetrics and Gynecology

As we enter into a new decade, let us focus on the way our world is changing around us and how it will impact the field of gynecology and obstetrics. This meeting will provide the practicing obstetrician gynecologist with new insights into the management of selected topics within our profession.

We will look at our aging population, and how our management of both pregnancy as well as menopause will change in the following decade. Advancements in the surgical treatment of endometriosis and other benign gynecological conditions will be discussed. Optimized management of morbidly adherent placentation will also be reviewed. Advancements in fetal surgery as well as simulation in obstetrics training will be investigated. Emerging trends in the management of female sexual dysfunction and vulvar disorders will be reviewed. We will also focus on the future of OB/GYN private practices and hospitalist medicine.

Great speakers have been scheduled for this conference.

SGA Research Award - $3,000 will be distributed among 3 winning Abstracts 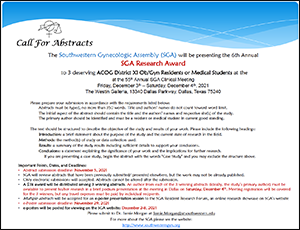 SGA will be presenting the 6th Annual SGA Research Award to 3 deserving ACOG District XI Ob/Gyn Residents or Medical Students at the upcoming SGA Clinical Conference. A $3,000 award will be distributed among 3 winning abstracts.

Gary Cunningham was born in Natchitoches, Louisiana and attended Louisiana State University Medical School. Following a residency in Obstetrics & Gynecology at Charity Hospital of New Orleans, he entered the maternal-fetal medicine fellowship at the University of Texas Southwestern Medical School to study with Dr. Jack Pritchard at Parkland Hospital. Together, they studied the clinical and laboratory changes in pregnant women with preeclampsia-eclampsia, sickle-cell disease, and other hema-tological, medical, and surgical disorders that complicate pregnancy. Dr. Cunningham subsequently joined the faculty to continue his clinical and research pursuits.

Dr. Cunningham describes himself as a ‘’lifelong learner’’ and advocate of evidence-based practice. He currently is a fulltime professor in the Department of Obstetrics and Gynecology. In this role, he enjoys providing care to women with high-risk pregnancies at Parkland Hospital and teaching medical students, residents, and maternal-fetal medicine fellows. 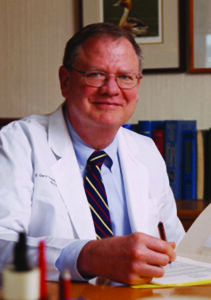